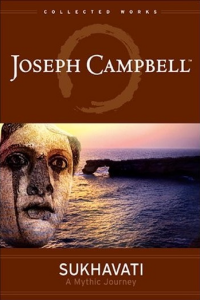 “We’re in a free fall into future. We don’t know where we’re going. Things are changing so fast. And always when you’re going through a long tunnel, anxiety comes along. But all you have to do to transform your hell into a paradise is to turn your fall into a voluntary act. It’s a very interesting shift of perspective . . . Joyfully participate in the sorrows of the world and everything changes.” —Joseph Campbell

Through archival excerpts from his finest filmed lectures interwoven with exquisite images and evocative music from around the world, renowned mythologist Joseph Campbell takes us on a journey of transcendence and illumination, a trip through the mythological symbols and sagas left by our ancient forebears. What is revealed en route is “mankind’s one great story,” the grand drama played out by all cultures on all continents since time immemorial.

This saga “projected” on the screen of the universe is the mythic adventure that became Campbell’s “Sukhavati,” what he passionately embraced as his life’s work, his place of bliss. Created by Maxine Harris and Sheldon Rocklin, with the enthusiastic support of the Joseph Campbell Foundation, this hypnotic and mesmerizing film is a deeply personal, almost spiritual, portrait of Campbell, told in his own words, in his twilight years, at the summit of his career and the apex of his intellectual powers. Through it, this great American thinker is still “joyfully participating in the sorrows of the world.” 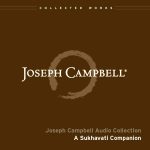 LISTEN TO THE SUKHAVATI COMPANION

Sukhavati is like an extra-credit master class for anyone who was captivated by Bill Moyers’ landmark series Joseph Campbell and the Power of Myth. Produced, directed, and edited by Maxine Harris with the support of the Joseph Campbell Foundation (as part of a “Collected Works” series of DVDs), this simple, 78-minute program combines soothing imagery and music from around the world with relevant excerpts from some of Campbell’s seminal lectures on mythology.

The title refers to Campbell’s “place of bliss,” or his life’s calling: To fully grasp and teach mythology as a common trait of humanity–a way of interpreting life experience and philosophy through universal narratives that transcend ethnic and cultural differences. Specifically, these Campbell excerpts emphasize “Sukhavati” as a voluntary shifting of perspective that allows “joyful participation in the sorrows of the world.” As Campbell observes, with illustrative examples taken from various mythologies from around the world, “we are in a free fall into the future,” and our anxieties about the unknown can be eliminated if we embrace uncertainty and “transform hell into a paradise.”

This acceptance of life’s miseries is enhanced through Campbell’s peerless ability to comparatively interpret mythologies related to cycles of life, death, and rebirth. While Campbell himself is shown only briefly in lecture clips, his words serve as voice-over narration to Harris’s well-chosen images. The combination is awkward at times (it’s not easy to follow Campbell’s lecture when you’re being lulled into a state of new-age relaxation), but the program succeeds in presenting the essence of Campbell’s philosophical worldview. –Jeff Shannon (Amazon.com)

We're in a freefall into future. We don't know where we're going. Things are changing so fast, and always when you're going through a long tunnel, anxiety comes along. And all you have to do to transform your hell into a paradise is to turn your fall into a voluntary act. It's a very interesting shift of perspective and that's all it is... joyful participation in the sorrows and everything changes. [share]