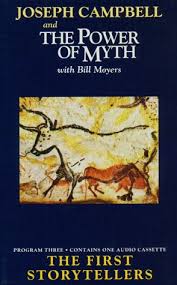 The third program of Joseph Campbell and The Power of Myth with Bill Moyers.

See The Power of Myth for more information

The late Joseph Campbell was one of the foremost scholars on the history of mythology throughout human culture. In The First Storytellers, part of his Power of Myth series, Campbell talks with co-host Bill Moyers about the function of story as a means of communicating culture and values. Campbell draws from his boundless scholarship on the topic in detailing the ways these early stories were used to integrate man with his world. Expect tales of shamans, rites of passage, and the interesting relationship between man and animal that has been lost in modern Western culture. — Sean Hurley