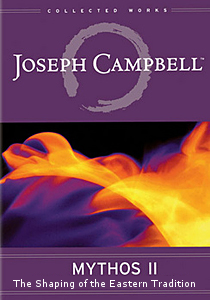 Mythos II: The Shaping of the Eastern Tradition

“Myth comes from the same zone as dream… from the great biological ground, whatever it may be. They are energies and they are matters of consciousness.” — Joseph Campbell

Mythology scholar Joseph Campbell spent his life learning the “one great story” of humanity. In his final years, he gave a remarkable series of talks exploring all he had learned about myths, symbols, spiritual journeys, and more. Hosted by Oscar® winner Susan Sarandon, presented in the order Campbell intended, each is an invitation to sit at the feet of a master storyteller. Seen on public television. Close-captioned.

Joseph Campbell, the late mythologist who became a household name among public television viewers in the 1980s, embarked on a series of final lectures for TV audiences before his death. Joseph Campbell: Mythos II is part of that effort, with a special emphasis on the Hindu and Buddhist traditions. Campbell begins the five programs on this two-disc set by reminding us that the purpose of myths is to relate human beings to their world. Early myths, says Campbell, connect humans to their place in the plant and animal world; later myths relate human society to the workings of astronomical cycles. It’s an evolving process. When we’re in accord with nature, says Campbell, we reap nature’s bounty. Hinduism and Buddhism are both efforts to relate people to their place in a cycle of existence that does not end until one transcends that cycle. Hinduism, Campbell says, is to Buddhism as Judaism is to Christianity: the older religions are traditions, while Buddhism and Christianity are “credo religions,” i.e., newer, “I believe” faith systems. Campbell spends some time discussing the development of Buddhism from monastic beginnings to its later appeal to millions of people, from an era of no images of the Buddha to the creation of beautiful sculptures of him immersed in transcendent consciousness. Campbell goes on to discuss, at length, the workings of yoga and their connection to increasingly sophisticated orders of love. (He also explains why the lowest cakras–pronounced chakras–are ruled by Dharma.) Finally, Campbell explains why the moment of death is the moment of illumination in Buddhism, and why the Boddhisatva of Compassion (i.e., the Dalai Lama to some people) is so important. This is a wonderful collection underscoring how unique Campbell was to a Western understanding of the role of myths in our lives. –Tom Keogh, Amazon