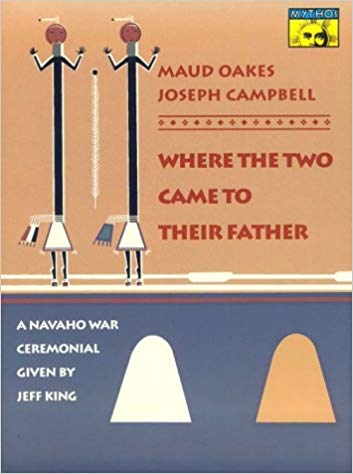 By Jeff King | Maud Oakes | Contributed to by Campbell

The rare first printing of this inaugural work of the Bollingen series includes portfolio sized (24″ x 18″) reproductions of the sand paintings central to this ceremonial, and a seperate, folio-sized booklet containing the narrative and commentary. This work takes its title from the creation myth of the Navaho people, which they incorporated into their blessing ceremony for tribe members headed to battle. Having observed this rite during World War II, when native Americans were for the first time drafted into the US military, ethnologist Maud Oakes recorded the legend and made reproductions of the beautiful ceremonial sand paintings, given to her by the Navaho medicine man, Jeff King.

The original publication was the first title in the famous Bollingen Series. The legend recounts the birth of twin heroes, Monster Slayer and Child Born of Water, and how they traveled to the House of the Sun to find their supernatural Father, then returned to earth stronger and wiser. This is a myth not only of creation, but also of kindness, death and deception, and the ritual embodying it is seen as imparting to the warrior a divine source of power. In his commentary, Joseph Campbell situates the Navaho religion, with its pantheon of gods, myths, chants, and symbols, among the great religions of the world.

Where the Two Came to Their Father Reviews

Of what profit to the young man going off to war to have chanted over him, five long days and nights, the hymns and prayers of such a rite? What can be the meaning of this solemn sitting or standing or walking on a picture, this wearing of feathers and string? To anyone familiar with the pictorial language of myth and cult the answer is clear and simple: the one sung over becomes identified, inwardly and outwardly, with the divine hero, and thus imbibes his power and the harmony of his perfection. [share]